The lack of a verdict in the Flint Water civil court case makes it obvious that the plaintiffs were unable, after almost six months of trying, to meet their burden of proof. The fact that the plaintiffs could not make their case to this jury underscores what the state’s own investigation found: there was an epic failure of government.

We were only asked to design a replacement of an existing power substation and the replacement of one existing pump, piping and concrete pads for that pump, and minor mechanical equipment that had nothing to do with the treatment operation of the plant, or water quality.

Given our limited scope of work, we had no way of knowing what steps were or were not taken by the state’s expert engineers, scientists and city staff. They alone were on the front line making all the decisions for the water supply transition, treatment, and monitoring.

Our hope is that residents will eventually know all the truths about what their local, state, and federal governments did in this case and why. No one wins until that is resolved. We hope that day is soon. We thank the jury for their commitment and their service.

The water tragedy in Flint, Michigan, has been the subject of extensive media coverage, both locally and nationally. Unfortunately, as with any incident of high public interest, the race to provide immediate coverage can lead to inaccurate or incomplete reporting. LAN offers this resource as a place to learn the truth about its involvement with the transfer of water from the Detroit source to the Flint River.

As early as 2011 LAN advised that water from the Flint River needed to be chemically treated before it could be used as a water source, including the use of full softening and the possible need for phosphate additives for corrosion control. LAN continued to assert that position as decisions were made to upgrade the Flint Water Treatment Facility (FWTP) to accept Flint River water. 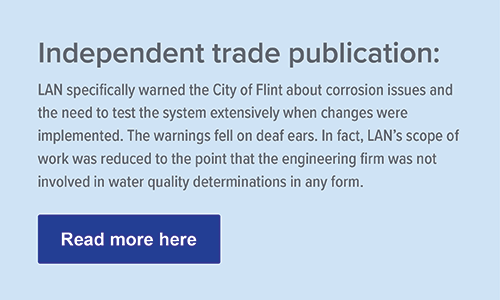 LAN was initially retained to provide a broad scope of services as part of this upgrade, but in an effort to minimize costs, the City eventually amended and narrowed LAN’s work to include only specific tasks regarding the repair and upgrade of specific components of the FWTP. Although LAN’s amended contract with its narrowed scope of work did not include evaluation of water quality and treatment, LAN made several recommendations to the City regarding the need for corrosion control.

These recommendations, including the need to test treated water from the Flint River for a minimum of 2-3 months before ever utilizing the River as a water source, were not undertaken by the City and not required by the Michigan Department of Environmental Quality (MDEQ), despite multiple conversations about their importance. It is clear that LAN’s role did not include FWTP operational services or water quality services.

The designs and upgrades that LAN was engaged to develop operated without issue, and it is clear that the firm provided these specific services in a responsible and appropriate manner in accordance with its limited scope of work and industry standards. Decisions not to provide appropriate corrosion control, which may have resulted in a decline in water quality, were made by the City and the MDEQ, not by LAN. As noted in the Flint Water Advisory Task Force findings, this tragedy was “a story of government failure” at all levels (for specifics of LAN’s involvement see LAN Response to Governor_s Task Force Questions 3-22-16).

LAN sympathizes with all who were affected by issues relating to the Flint water supply, which has resulted in several lawsuits, some of which name LAN as a defendant. Given that the allegations in these lawsuits mischaracterize LAN’s role for the City of Flint, the facts surrounding the treatment of water from the Flint River and LAN’s responsibilities under its contracts with the City and industry standards, the firm will vigorously defend its position in court.

Since its founding in 1935, Lockwood, Andrews & Newnam has been dedicated to engineering excellence that has produced exceptional projects that enable and enhance the lives and communities we live and work in. LAN remains committed to providing all of its clients with exceptional engineering services that make it a leader in the industry and the firm of choice for projects across the country.